A Live Evening with Paddy the Baddy 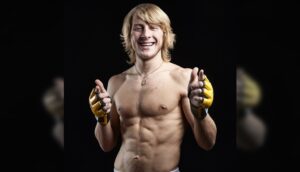 Local UFC fighter, Patrick “Paddy the Baddy” Pimblett, will be in conversation as part of the popular Anything Goes Podcast with James English this March.

Paddy exploded onto the international MMA scene in 2021, having previously made his name as a Cage Warriors featherweight champion. With four straight wins on his UFC record as of December 2022, he has quickly gained the attention of the viewing masses and has established a large following.

Outside of the ring, Paddy is renowned for his straight-talking and often audacious personality. He is a fiercely patriotic Scouser, who is a passionate supporter of Liverpool FC and has recently gained plaudits for being an advocate of male’s mental health.

We are excited to welcome Paddy along with James English, who is a popular podcast host who has accumulated a huge following of his own, having interviewed an interesting mix of figures from elite sport to the music industry to ex-military personnel – among many others!