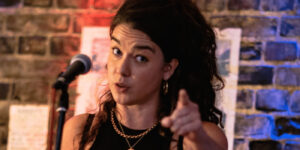 A Lovely Word is back, downstairs at the Everyman on the first Thursday of every month.

A Lovely Word is Liverpool’s most eclectic poetry night, featuring two halves of open mic poets, and a headliner beginning the first half. Hosted by Alex Ferguson, this free event is a fun, relaxed and friendly evening of performance poetry.

Elle Dillon-Reams is a performer and spoken word artist, with two self written, sell out, spoken word shows under her belt.

Her debut poetry collection ‘Maladptive’ was published in January 2022 with Verve Poetry Publishers.

She has worked with the award winning Handlebards, Gecko, and recently performed as a dancer and cabaret artist at both Glastonbury and Latitude festival.

Her debut spoken word solo show ‘HoneyBEE’ won both the Three weeks Editors award for excellence and ‘Best Newcomer’ from the Scotsman.

Whether you are a new poet performing for the first time or a seasoned poet who wants to try out some new stuff – sign up to perform by EITHER;

II) emailing alovelywordpodcast@gmail.com with a confirmation of your full name, mobile number