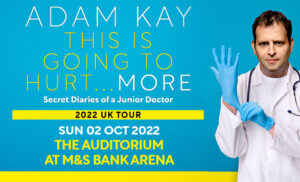 Adam Kay is an award-winning writer and comedian. His debut book, This is Going to Hurt, is a literary sensation: a Sunday Times number one bestseller for over a year, it has sold over 2.5 million copies, making it the bestselling UK narrative non-fiction book of the 21st century. It is the bestselling non-fiction ebook of all time and has been translated into 37 languages (and counting).

This is Going to Hurt has won ten national awards including a record-breaking four National Book Awards. His bestselling follow-up, Twas The Nightshift Before Christmas was a number one bestseller, and sold over 500,000 copies. His anthology Dear NHS raised over £400,000 for charity and featured contributions from Emilia Clarke, Ed Sheeran, Emma Thompson, Emma Watson and Paul McCartney. His children’s books Kay’s Anatomy and Kay’s Marvellous Medicine have been translated into 26 language and sold over 350,000 copies.