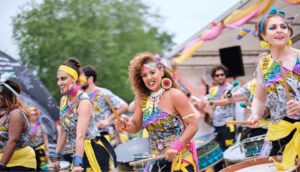 Following an incredible 30th anniversary year in 2022, Africa Oyé have announced the dates for their iconic festival in Liverpool’s Sefton Park this summer.

One of Merseyside’s most picturesque green spaces will once again be filled with the music and culture of Africa, the Caribbean and the Diaspora, for two free days of live music, workshops, DJ stages, food stalls and a range of traders in the Oyé Village.

One of the most popular areas of festival, The Oyé Active Zone – which hosts free multi-arts workshops across the whole weekend – will feature alongside a brand new Toddler Zone, catering for the youngest festival goers, while the acclaimed DJ stages Trenchtown and Freetown are also confirmed to return.

The festival’s commitment to being ‘free and open to all’ also means that the Access Tent, British Sign Language on-stage translators and Access Viewing Platform will also all return for this year’s extravaganza.