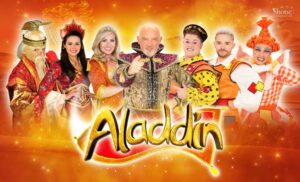 Don’t miss this year’s spectacular pantomime featuring: a delicious blend of exotic scenery, colourful costumes, a live band, dazzling dance routines, great songs, plenty of laughter and a sensational cast of performers – – It will be an unforgettable experience for children and adults alike.

Make your wishes come true and join us on a magic carpet ride to Old Peking. Meet Aladdin, his brother Wishee Washee & his mother Widow Twankey as they battle against the evil Abanazar to stop his evil plan to become Master of The World! Will Aladdin save the day and fall in love with the beautiful Princess Jasmine? There’s only one way to find out…

(VIP Tickets Available which include a Signed Programme and Meet & Greet)