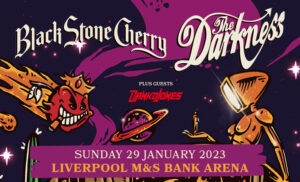 The darkness and black stone cherry announce a co-headline UK tour for 2022! Along with special guests Danko Jones.

This upcoming tour will see one of the UK’s most well-loved rock heroes play alongside the legendary Kentucky-based group Black Stone Cherry. These two titans of rock will hit the road in 2023 across multiple venues around the UK, coming to the M&S Bank Arena in Liverpool on Sunday 29 January. It’s going to be a great night of rock music in Liverpool you won’t want to miss!

Fans of the multi-platinum UK rock icons The Darkness will be treated to new songs from the band’s new album Motorheart, along with slaying their award-winning, platinum-selling hit singles including ‘I Believe in a Thing Called Love’ and ‘Love Is Only A Feeling’ – a true spectacle to behold.

Alongside these, the ‘four rock’n’roll dudes’ of the Black Stone Cherry band due to release their latest live album this week ‘Live From The Royal Albert Hall’, will perform all of their biggest hits such as ‘In My Blood‘, ‘White Trash Millionaire‘, ‘Like I Roll‘, ‘Lonely Train‘ & ‘Blind Man‘ and more.

Under 14s must be accompanied with an adult.

No Under 14s on the standing floor area.