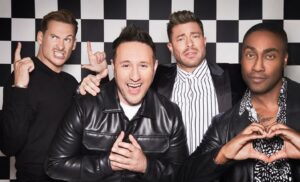 Blue have announced their new album Heart & Soul will be released on 9th September and confirm the rescheduled tour dates. Blue are looking forward to giving their fans a year to remember with a brand-new studio album as well as a UK tour, now taking place in December. Joining Blue on tour will be the fantastic singer-songwriter Megan McKenna.

The British four-piece, including all 4 original members – Antony Costa, Duncan James, Lee Ryan and Simon Webbe – have been back together in the studio working on one of their best records yet. Due to some very exciting plans to be announced in due course, Blue have had to move back their tour a few months.

Blue are one of the most successful British bands and have sold over 16 million albums worldwide including 3.6 million albums and 1.4 million singles in the UK. Their first 3 albums all topped the Official Album Chart and the group have worked with a variety of legends including Stevie Wonder, Elton John and Lil’ Kim. The British four-piece have recently begun work on new music, with announcements to come.