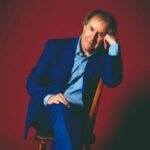 Chris de Burgh will be celebrating his album ‘The Legend of Robin Hood’, as well performing many of his greatest hits this September at the Liverpool Philharmonic Hall.

It’s been 45 years, since the release of Chris De Burgh’s eponymous album ‘Spanish Train and Other Stories’ and to date, he has sold over 50 million albums and sold out performances in concert halls worldwide.

The event will take place at the Liverpool Philharmonic Hall on Monday 12th September.