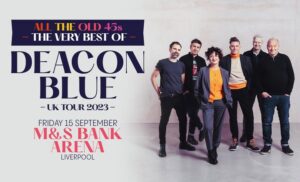 Thirty-five years since their debut single, Dignity, and millions of record sales since, Deacon Blue are digging out all their old 45s – the Top 10s, the favourites, the sing-a-long rarities – and touring the UK & Ireland in September / October 2023. The band have always thrived onstage, but they’ve never played gigs quite like this: they’ll perform two sets, with no support. The first half will be an intimate acoustic show, and then they’ll go electric for a raucous trip across their hits.

Kicking off in the birthplace of pop (as Ross’s recent memoir attests, everything comes back to The Beatles), the tour will launch in Liverpool – which has long held a special place in the band’s collective heart – before travelling the length of the land. Ross, co-vocalist Lorraine McIntosh, Dougie Vipond (drums), Jim Prime (keyboards), Gregor Philp (guitar) and Lewis Gordon (bass) will breathe new life into well-loved songs like Dignity, Loaded, Wages Day, Real Gone Kid, I’ll Never Fall In Love Again, Your Swaying Arms, Twist & Shout, Your Town, The Hipsters and City Of Love. And so many more.

No under 14s are permitted in the standing zones. All under 14s must be accompanied by an adult.