Death Drop Back In The Habit 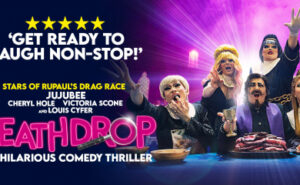 The Sound of Music meets Scary Movie in this jam-packed, riotous comedy. Death Drop is the hilarious thriller which pays homage to all your favourite horror films – from IT to Scream and everything in-between.

An unwanted visitor to the Convent of St. Babs triggers unnatural happenings that threaten the Sisters’ sacred way of life. Can they unmask their terrifying tormentor before it’s too late? Or is the call coming from inside the convent?