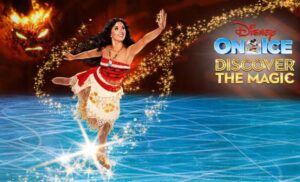 Disney On Ice presents Discover the Magic is bringing enchantment to guests through dynamic moments that take place on the ice and in the air. This adventure delivers compelling storytelling through multi-leveled production numbers visits Liverpool from 16th March to 19th March at the M&S Bank Arena, Liverpool.

Embark on a quest with Mickey Mouse and friends as they follow Captain Hook’s treasure map for clues to find Tinker Bell after he attempts to capture her magic. Journey across the Marigold Bridge with Miguel from Disney●Pixar’s Coco into the magnificent and mystical Land of the Dead and discover a vibrantly colourful performance with skeletons atop sway poles dancing over the audience in a beautiful cultural celebration of family.

Travel to the wintry world of Arendelle and sing along with Elsa as video projection creates a kaleidoscope of crystals to help build her ice palace. Witness Belle lift into the sky as the enchanted chandelier comes to life high over the ice. Demonstrate the power of teamwork when Buzz Lightyear, Woody and Jessie recruit the Green Army Men for a daring rescue in Andy’s room.

Laugh hysterically as the hilarious pirates flip, tumble, and twist on tumble tracks, stilts and more in an effort to showcase their talents for Captain Hook. Sail away with Moana on her daring voyage across the ocean and bravely encounter the fiery wrath of Te Ka. And make magical memories with your whole family during Aladdin and The Little Mermaid as the party becomes an all-out celebration.

Ticket prices range from £23.97-£60.00 per person,tickets go on-sale to the general public on 4th November.