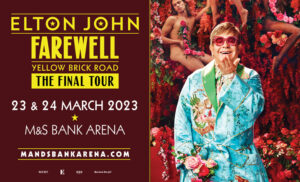 Given the electric reception that Elton received when he played to a sold-out Anfield Stadium earlier this year, he couldn’t wish for a better place to start the final leg of his Farewell Yellow Brick Road tour.

These dates mark the superstar’s last-ever tour and the end of half a century on the road for one of pop culture’s most enduring performers, who was recently named as the most successful male solo artist in Billboard Hot 100 chart history, having logged 67 entries, including nine No. 1s and 27 Top 10s. Elton’s new stage production will take his fans on a musical and highly visual journey spanning a 50-year career of hits like no one has ever seen before.