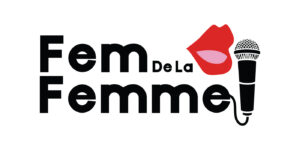 Want to belly laugh with some amazingly funny women?

Downstairs at the Everyman is pleased as punch to welcome Fem De La Femme on the fourth Thursday of every month. This seriously funny comedy night is packed with some of the finest women comedians from the North West and beyond. From established comics to those taking their first steps into comedy, the night is packed with jokes, laughter, spoken word and there might even be a raffle.

Fem De La Femme is a big fan of women of all backgrounds and offers a warm, welcoming space for everyone to get together and enjoy the best women in comedy, and fellas you’re welcome to come too!

Joy France – Spoken Word
Joy France is a multi-award / slam winning poet, writer, comedy performer and all round creative who is proud to be a magnet for the gloriously weird. She engages her audience with deft (and often daft!) use of words. Joy discovered her creativity and passion for performance poetry in her mid 50s and says “having learned to ignore the doubting voices in my head, I have now found my own voice and will never again be silenced” Expect the unexpected.
‘Witty and wise and with a natural talent, Joy France has that ‘je ne sais quoi’ Tony Walsh

Melina Fiol – Stand Up
Melina is one of the fastest rising new acts emerging from the North West comedy scene today. This is no surprise as her sharp wit, confident delivery and relatable self awareness has been disarming audiences across the country.
‘Beyond hilarious‘ – Funny How? Comedy

Ali Panting – Stand Up
Desperately seeking a reason to get out of the house and avoid putting her toddlers to bed, Ali Panting started out in comedy in 2021. With a blend of classic standup, props and poetry she’s establishing herself as a funny and unique new voice on the circuit.
‘Wonderful, so original’ – Monkey Business Comedy Club, Camden
‘Absolute class‘ – Jonny Brook

Anna Thomas – Stand Up
Winner @ The BBC New Comedy Award 2021 Nominated ‘Breakthrough Act of the Year” @ The North West Comedy Awards 2022
‘Distinctive rhythms and charmingly dotty attitude that wins our affections” “appealing air of not quite being of this world. But whatever planet she’s from, they know funny‘ Chortle

Sian Davies – Stand Up
Sian Davies is a comedian, MC, presenter and writer from the North West of England. Her droll, widely relatable, observational material puts an insightful spin on the everyday.
She regularly performs at theatres, festivals and comedy clubs across the UK and is the driving force behind sell out fringe phenomenon’s Best in Class and Comedy Queers.
Sian won the award for Best Debut Show at the Leicester Comedy Festival in 2020, was runner up in the Funny Women Stage Award in 2019 and winner of Hilarity Bites Best New Act in 2018.
‘A cross between Peter Kay and Zoe Lyons’ – Bruce Dessau, Beyong The Joke
‘Simultaneously warm and sharp, she’s what Jason Manford would be if he was a Liverpudlian lesbian, with a broad appeal and snappy jokes‘ -Steve Bennett, Chortle