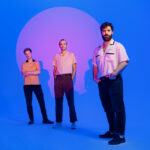 The Foals will be stopping off at Liverpool this January for a special intimate show at the O2 Academy Liverpool.