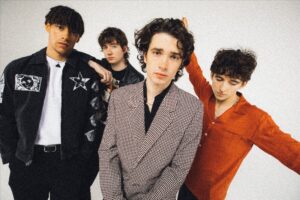 INHALER have announced details of a major world tour, the 36-date tour includes 8 headline shows in the UK in support of the band’s new album ‘Cuts & Bruises’.

The Irish four-piece will release their eagerly anticipated second album on February 17th via Polydor, and will be headlining Liverpool Mountford Hall on 18th February 2023.

Following a run of festival dates this year, including their first Glastonbury performance, a gig at Dublin’s Fairview Park and a tour of Europe supporting Arctic Monkeys, INHALER tomorrow embark on a sold out run of four UK dates including a sold out show at The Roundhouse in London on October 19th.

In addition to their support slots next year with Harry Styles at Slane Castle and Sam Fender at St James Park, INHALER have just been announced as special guests of Arctic Monkeys on their 2023 European tour.