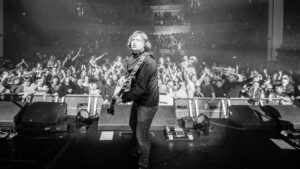 Following his sell out show here at the M&S Bank Arena, Jamie Webster is headlining his own outdoor show at the Pier Head in summer 2023.

Following the overwhelming success of the first edition of ‘On the Waterfront’, plans have just been announced for its return in 2023, kicking off the summer season for another series of stunning shows and live performances, with the first phase headliners featuring some of Liverpool’s homegrown heroes.
First up on is the phenomenon that is Jamie Webster who has gone from a modern-day local folk hero to an established solo artist in his own right.  Fresh off the back of a UK & Ireland headline tour and packed Glastonbury performance, 2022 also saw the release of his critically acclaimed second album ‘Moments. He will be joined on stage by fellow bandmates Lighting Seeds bassist Tim Cunningham and Mick Head’s Red Elastic Band guitarist Danny Murphy. This will be his first major headline outdoor show to date, set right at the heart of the city in front of the iconic Three Graces, this is guaranteed to be an unmissable show for his legion of dedicated fans, as well as a true and deserved homecoming for one of the city’s biggest stars.
Please note this is a strictly 18+ event and ID checks will be in place.