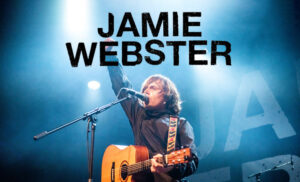 Liverpool’s Jamie Webster announces his biggest, ever live appearance with a gig in his hometown at the M&S Bank Arena in November 2022.

The singer-songwriter will be his sound of Scouse troubadour to the arena on Saturday 19th November 2022, with tickets going on general sale on Friday, October 29 2021 at 10am.  A fan pre-sale will be available two days prior for anyone pre-ordering his second album Moments.

The next exciting stage in Webster’s rise follows a monumental year just gone, in which he hit the Top Ten with his debut album, We Get By and became the UK Official Folk Album Chart’s first ever number one artist.

Webster’s shows have become synonymous with Liverpool FC, with The Guardian describing him as “the semi official musician of the football club”. Webster began headlining fan affiliated appearances at UEFA Champions League final box parks in Kyiv and Madrid in 2019 to 60,000 fans.