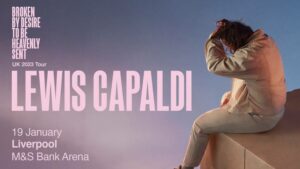 Lewis Capaldi announces a 31-Date UK and European Arena Tour to support the brand new album ‘Broken By Desire To Be Heavenly Sent’ and will be coming to Liverpool’s M&S Bank Arena in January 2023!

After making his eagerly-awaited return last month and rocketing straight to the top of the UK singles chart with ‘Forget Me’, making it his third UK number 1, Lewis Capaldi today announces his brand new record Broken By Desire To Be Heavenly Sent – out May 19th 2023 on EMI Records.

It is the follow up to his debut, Divinely Uninspired To A Hellish Extent, which was the biggest selling UK album of both 2019 & 2020.

After selling out headline shows to hundreds of thousands across the continents, Lewis sold out London’s SSE Arena Wembley ahead of his debut album release, making him one of the first artists to ever achieve such a feat. Just this summer, he re-emerged to headline his first ever festivals. He will now take to the road next year for a full arena headline tour across the UK & Europe.

If his first album made him an international star, with his second it’s nothing less than superstardom that beckons. Fans across the world have connected with ‘Forget Me’ in their droves, showing that the insatiable appetite for Capaldi burns as bright as ever.