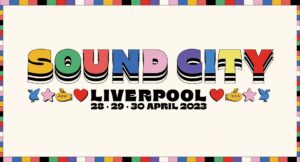 The UK’s leading independent festival for new music and central hub for discovering the best creative experiences in the heart of Liverpool, Sound City is back for 2023!

The independent festival for new music returns on 29th and 30th April 2023. With the likes of Ed Sheeran, Stormzy, Florence and the Machine, Lizzo and hundreds more making their first appearances on the UK festival circuit at Sound City, you never know who you’ll discover at this year’s festival.

The first wave of artists has just been announced for Sound City 2023, including their first headliner, pop sensation, Maisie Peters. After selling out her entire UK tour in under one minute, Maise Peters is one of the most talked about new artists in the country. However, she is yet to appear in the North-West dates on her current tour so this is not one to be missed!

Joining her on the line up are alt-pop star Beren Olivia, indie-pop queen SOFY, lively indie outfit The Royston Club and many more, including a selection of the most exciting North-West newcomers such as Courting, Delights, THE GOA EXPRESS and Reignmaker.

Weekend festival tickets are priced at £59.50+BF per person.