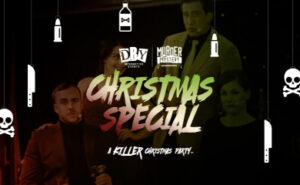 1958, Christmas in Hollywood California and the stars are out in force on the red carpet – putting on a musical extravaganza to raise money for the homeless who will be spending the festive season with nothing but the sidewalk for company.

The biggest draw is The legendary Capeoli – fresh from a sell out tour and box-office busting movie run – they have Hollywood – heck, the WORLD – in the palm of their hand.  Their charm and good grace is legendary, but it seems that there’s more to the Italian born rat-packer than meets the eye.  The evening may be about charity and good will to all men, but there’s a stink about the place that smells like… MURDER!

An evening of intrigue, live music and murder – grab onto your hats boys and gals – it’s gonna be Killer or a party out there.