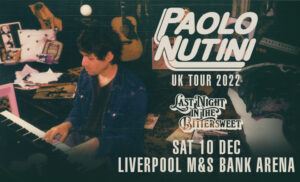 After securing the UK No 1 album spot on Friday, 9th July and following on from a knock-out performance to 50,000 awe-struck fans at TRNSMT on Glasgow Green, Paolo Nutini announces another date to his epic UK tour later this year at Liverpool M&S Bank Arena on Saturday 10th December.

Paolo Nutini new album ‘Last Night In The Bittersweet’ is a 70-minute epic that spans the distance from classic rock to post-punk to hypnotic Krautrock, in the process proving its value as his deepest, most varied, most accomplished, and ultimately most rewarding set so far.

A recap of everything Paolo has achieved to date reiterates his status as one of British music’s biggest success stories. Two of his three albums to date, ‘Sunny Side Up’ and ‘Caustic Love’, have hit #1 on the UK album charts as he amassed 8million global album sales, 8 million UK single sales, and 1.5 billion global streams. The Ivor Novello winner and multiple BRIT Award nominee has also collected a remarkable 18 Platinum certifications in the UK alone.