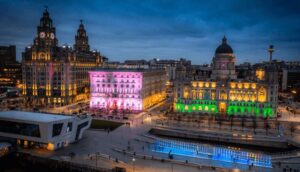 Liverpool’s much-loved light trail, River of Light, will return to the city’s waterfront for October for another celebration of light, sound and art.

Showcasing installations from local and international artists, the concept, whilst largely under wraps, will link into the World Gymnastics Championships that takes place at the same time at the M&S Bank Arena.

2021 seen the event bring installations such as Dance Together  a collaborative experience between the artistic partnership Lucid Creates and Chibuku, an immersive audio visual experience bringing together archive music from some of the most celebrated nights in the Chibuku’s history alongside a collation of anecdotes & memories and brand new poetry created by multimedia artist Suzannah Pettigrew whilst legendary Chibuku DJs provide the soundtrack to this long-awaited celebration of togetherness.

This years 2km walking trail, includes a mix of brand new, world premieres, as well as existing artworks which have never been displayed in the city before.

The never-before seen commissions are:

The full details of all ten pieces, the artists and their locations can be found on the official River of Light website here.

This is a FREE event.