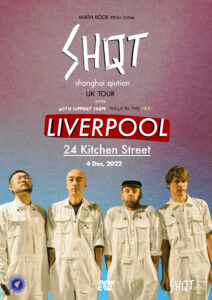 Shanghai Qiutian is an adventurous math rock band based in Shanghai, China. They have been actively involved with Chinese indie scene since 2018, gradually gained reputation and recognition from the local scene.

After finishing their Chinese national tour, they have started their most ambitious project till date, a world tour that will bring them for the first time ever to the UK after passing from Korea.

They are coming to Liverpool on the 4th December, at the local venue, 24 kitchen, support with Walk in the Park, a south Korean based Synth-pop band. Their electric live shows have quickly gained a lot of international attention, and now they are ready to make everyone see what is their live show about.