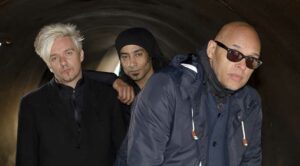 This March, Liverpool’s iconic Cavern Club will be welcoming The Christians.

The Christians burst onto the music scene in the late 80s when their debut album THE CHRISTIANS (which still remains to this day Islands records highest selling debut album) with no less than 7 singles including Forgotten Town, Ideal World, Born Again, Hooverville … the bands second album COLOUR knocked off Phil Collins from the Number One slot in 1991 and the band went on to enjoy years of UK European success with Words, Father and other hits from subsequent album HAPPY IN HELL.

Lead singer Garry Christian still sounds as good today as he did back then and the band are constantly touring as well as being invited to appear at many prestigious festivals where The Christians have made a name for performing a belting set packed full of the hits that bring back pure happiness and nostagia to the crowd.

Described by Chris Evans as ‘the best gig he’s ever been to’ The Christians are a reminder that not everything from the 80s was uncool! The surprising meaningful and appropriate songs combined with a voice that ‘penetrates the soul’ … it’s not difficult to see why THE CHRISTIANS seem to be celebrating such a big resurgence!

The Live Lounge is a standing venue with some unreserved seating. Seating is not guaranteed and may not be available for all shows. If you have a disability and need a seat please get in touch with us in advance to make arrangements.