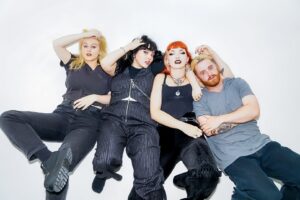 Liverpool-based four-piece The Crawlers, who recently signed to Polydor Records will be heading to Liverpool’s O2 Academy this November.

The band have been enjoying success with their hit single ‘Come Over (Again)’ which has already racked up over 15.5 million streams on Spotify and one million views on YouTube.

Over the last year, Crawlers have built a reputation as one of the hottest and most exciting new bands in the UK. The band have gained themselves an impressive loyal following, with a string of single releases leading into their debut EP – released through Modern Sky/Lab Records in October – clocking up over 30 million combined streams. The EP was produced by Pete Robertson and mixed by Tom Roach at Coastal Studios.

The event takes place on Thursday 10th November, at the O2 Academy Liverpool.

Ticket prices start from £17.00 per person, under 14s must be accompanied by an adult.