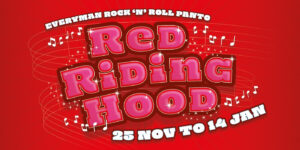 The legendary Everyman rock n roll panto is back for 2022 and this year we’re telling the tale of Red Riding Hood.

Who’s the mysterious lone wolf lurking in the forests? And what does he want with Red and her grandmother?

You might think you know the story of Red Riding Hood, but this is the tale told Everyman style! There will be outlandish and sparkling costumes, plenty of plot twists and surprises, and full to the brim with musical hits performed by a company of supremely talented actor musicians.

The multi-award-winning Creative Team assembled for this year’s show blends together the brilliance of past rock n roll pantos with inventive new voices.  Writer Peter Rowe has written eleven record-breaking rock n roll pantos and makes a welcome to Liverpool after 25 years having previously been Artistic Director at the Everyman and most recently at the New Wolsey Theatre in Ipswich. Lucy Cullingford was Choreographer for the rock n roll panto back in 2001 and 2002 and has since worked extensively for for the RSC, National Theatre and on numerous West End and Broadway shows, including Constellations. Veterans of numerous past pantos, the theatres’ resident Sound Designer Ian Davies and Costume Supervisor Jacquie Davies, together with actor Adam Keast also make a welcome return.

Suba Das is the theatres’ new Creative Director and this will be the first production he directs in his new role. Designing Red Riding Hood is LIPA Graduate Grace Smart, whose credits include work at The Globe, Curve Leicester, Nottingham Playhouse and Donmar Warehouse. Musical Director and Arranger Rob Green is a singer, songwriter, performer and musical director from Nottingham based in Leeds who has toured the UK and Europe performing as a solo artist, supporting the Whitney Houston Hologram Arena Tour and Earth, Wind and Fire on their UK and France Arena Tour. For the first time the rock n roll panto will have a dedicated Circus Director in Jack Horner, who has worked with Cirque Du Soleil and Disney, as well as Moulin Rouge! The Musical in London’s West End.