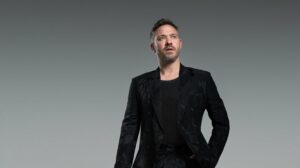 Will Young has announced the Will Young – 20 Years Tour in celebration of the 20th anniversary of his Pop Idol win, will be heading to Liverpool for October 2022.

Since winning the show’s first series in 2002, Will has gone on to become the most successful contestant to ever appear on the show, with over 10 million records sold, 8 UK Top 3 albums including his recent 2021 album Crying On The Bathroom Floor, and the No.1 best-selling single of the noughties, ‘Evergreen/Anything Is Possible’.

Alongside news of the tour, Will also shares details of his upcoming album ‘20 Years – The Greatest Hits’, set for release in 2022. Spanning from his Pop Idol winner’s single ‘Evergreen’, the No.1 hits ‘Light My Fire’ and ‘Leave Right Now’, to Crying On The Bathroom Floor’s ‘Daniel’, as well as two brand new songs, the album will be available on CD, deluxe signed CD & vinyl LP via Sony Music.

Will Young will be heading to The Philharmonic Hall Liverpool on Tuesday 25th October 2022.