Have a business? Register FREE!
Explore the Directory here!

It is often said I am ‘late to the party’, which is probably why the invites have dried up. But on this occasion, I’m delighted to be late – regardless of time, the remains of the buffet and playing catch up with friends.

This party began with the sun blazing and my face avoiding the blazing sun. After recommendations a plenty, I armed myself with the music of Nick Ellis, factor 750 sunblock and packed up my troubles in an old Asda bag and set off on a stroll to Sefton Park for a sit down (in the shade) to listen to my recently purchased Grace & Danger, Daylight Ghosts and Adult Fiction.

Walking the South Liverpool streets to the salubrious and scrumptious Sefton Park, the headphones purred out ‘Grace and Danger’ and the beautifully crafted streetscape narrative noir. The pitch perfect vocals and pace and mood of each song captures a chapter of a theme with scenes transporting me, captivating me and reassuring me; arriving at this party late, is still a good decision.

Sitting in the park, I explored and enjoyed the layers within the vocals of Nick Ellis as those around me enjoyed their layers of ice cream. The lazy sunbathers looked at ease – melting, but I felt more at ease as the music of Nick Ellis provided a warmth that this aggressive sun cannot provide.

The surrealism of folk follows up Daylight Ghosts and the wonderful family folklore tales within Adult Fiction provides such wonderful combinations of song craft and accomplished guitar playing. The narrative and songs are built, entwined and wrapped up perfectly. The vocals, poetic romantic verse and expression provided my own summer’s day celebration.

Nick Ellis’ distinctive, textured vocals and folk scene quick fire rhythmic attack and expression is, I feel, unique in this city. I have read and heard comparisons to this that and the other, but I won’t compare with the other, that or this, because he stands alone.

The albums were recorded in single sessions inside iconic venues such as St Georges Hall and the Adolf Gustav Nordic Church and, thus, provide a sense of time and place. With this organic approach; the songs breathe in the echoes of the room, emphasising the brilliance of the vocals and lyrics.

Throughout the day, I provided my own rapturous applause to songs such as ‘All Night Long, The Blue Soul, Your Love, Lovers in July, Electric Blue High Heels The Bistro Confessional’.

“Don’t ever give your heart away unless you never want it back “, from Heartbreak City (Adult Fiction) made the mind think and the questions come thick and fast.

And with questions in mind, I interviewed the man himself about the early Nick Ellis, his own inspirations and his forthcoming Album, ‘Speakers Corner’.

Q. The early Nick Ellis, what artists did you admire – and did they provide you with an urgency to pick up the guitar?

A. Buddy Holly, Elvis Presley, and The Who. These are the first artists I ever heard. When I first heard Pete Townsend coming through the speakers of a big silver Pioneer stereo, I thought to myself: I want to make noises like that. I felt an immediate draw to the guitar because it was practical, powerful and expressive.

Q. Growing up, did you frequent the gig venues around Liverpool, do you recall any stand out gigs that inspired you’

A. As a teenager, I frequented La Bateau, where we used to go listen to Paul Smith and Edgar Jones DJ. They played some amazing stuff – still do. Those guys influenced me just as much as bands. Other places we used to hang out in were The Zanzibar, The Picket, Heebeejeebees cellar, way before it was a silly gaff, The Mardi Gras on Bold Street, The Lomax on Hotham Street, The Krazyhouse, The Pilgrim, The Magnet and The Brewery (formerly The Black Horse and rainbow/The Metropolitan). A gig that stands out to me was The Isrites at La Bateau, who were Edgar Jones’ band after The Stairs.

Q. Has Liverpool inspired you lyrically – who do you admire and why?

A. Yes, it has. I’ve been inspired by the beautiful poetry of Echo and the Bunnymen, the songs of Shack, the rhythmic delivery of The La’s, the work of writer Alan Bleasdale, the Liverpool poets like Adrian Henri, Brian Patten and Roger McGough, writer Malcolm Lowry, lost poet Paul Birtill and modern spoken word artists/storytellers like Roy, Jerry Linford and Gary Jardine.

Q. Being solo, do you feel you have to trust your own judgement more, is that an added pressure?

A. Yes, you trust your judgement, completely. You only feel pressure when you go into something that you are no prepared for – I’m always prepared or try to be as best as i can.

Q. The Albums have been recorded in various venues; whether that be St. Georges Hall or The Scandinavian Church, I feel the sound and this organic approach adds an extra layer to the songs and the narrative. Is this an approach you have always been interested in?

A. Yes, it brings a ‘fifth voice’ to the performance. It’s something that is only captured in time, in that particular place – moments in motion. I’ve worked in a lot of studios and i got bored by them and felt limited, so when I was recording on my own, I decided to use places that sounded unique – but, it’s all about the performance, not the room.

Q. Is there another similar venue, locally, you would like to play?

Q. Has the new album Speakers’ Corner been recorded in similar style?

A. Yes, but percussion was added later, in a studio.

Q. I feel the later albums are darker narratives and a darker body of work – is this the case with the new album?

A. That’s correct, the previous albums are a darker body of work and just happened to find their natural conclusion in that element. They sat together in a cooperative way. The new album has its dark moments, but personally, I feel the tone of the songs are more confrontational and immediate. I wasn’t in the mood for telling stories, I wanted to express how I felt about the time I was living in.

Q. Is the narrative still strong – a series of ‘stories’, incidental, scenes?

A. The narrative is not a ‘story’, as such. It is more of a thematic performance, hence the title. The ‘Speakers’ in question are the twelve songs. Each song has its own character that expresses their opinion.

A. Personally, I think a record translates better when the narrative is joined at the dots, but that’s just one way of working.

Q. I feel, because of these strong narratives, the songs are almost made to measure – tailored perfectly. Is this the case?

A. I suppose the songs that I put on those albums are there because they seem to sit right and work off each other to create certain emotional state of mind and paint a very vivid picture. Songs are like strangers that need to find their way home, but they can always get up and leave, then disappear.

Q. Your distinctive vocals and songs I haven’t heard before in or around Liverpool – do you feel like you stand alone.

A. That’s an interesting observation, because I tend to feel people from a certain area sound a certain way, like The Byrds and The Allah Las, for example. I’d say I’ve found a style that works a certain way. I’d probably say my vocal style has come from having to sing over a large number of band members or from singing in the street while busking. There’s a certain range you need to sing at in order to be heard in those situations. As regards to standing alone, I’d describe it more as ‘exploring a different thread’.

Q. Finally, ‘On the streets I ran’. Can you name three Liverpool streets that mean the most to you and why? 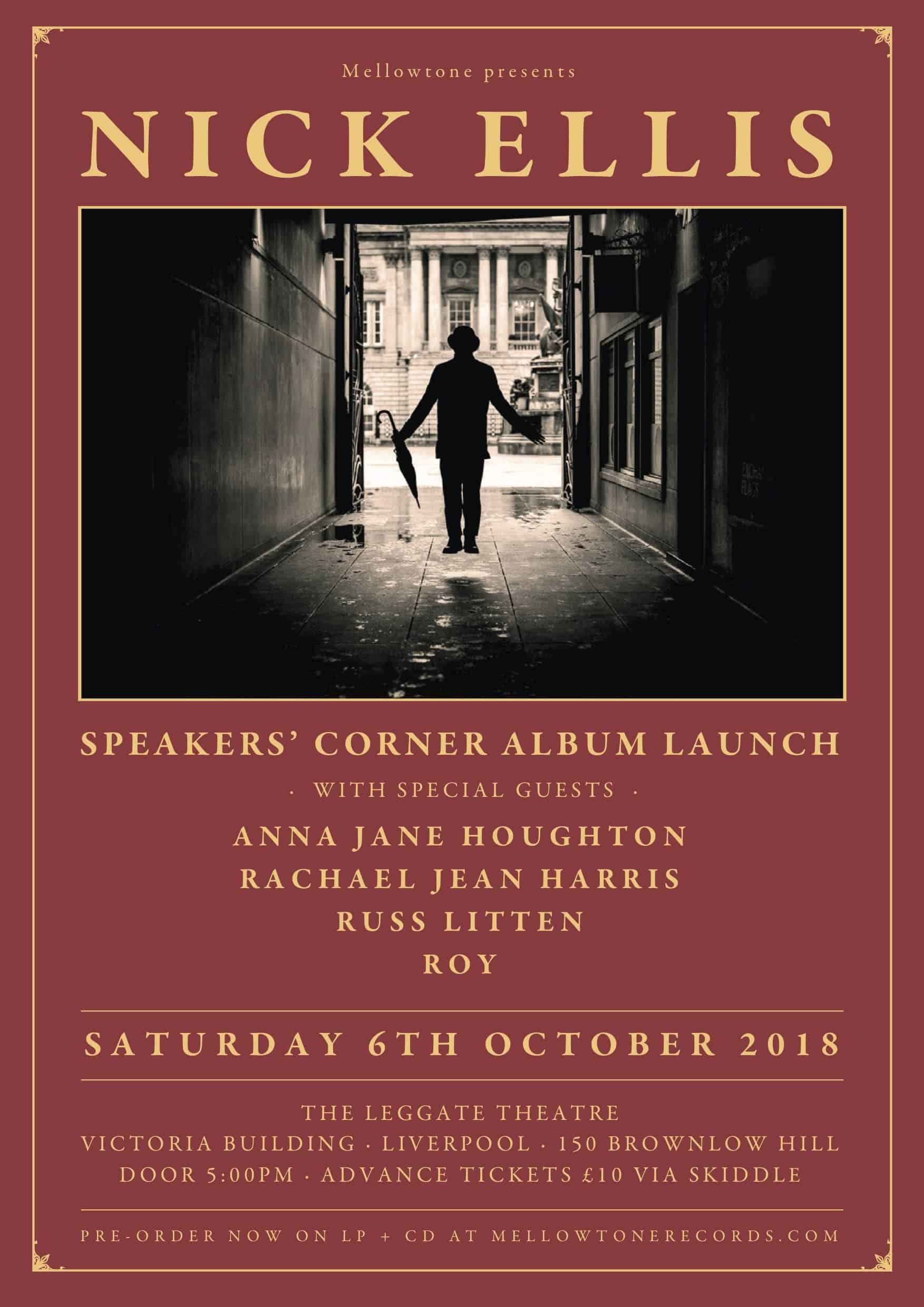 Nick Ellis has quite rightly received glowing feedback such as: “Fascinating” (Whispering Bob Harris, BBC 2) and “Wonderful” (Lauren Laverne, BBC 6 Music). I am sure the plaudits will continue.

The scorching summer sun will eventually fade away but, thankfully, the fascinating and captivating Nick Ellis is definitely is here to stay.

READ MORE: Matthew Jacobson ‘On The Streets I Ran’ with Janice Long